Due to COVID-19, we have all seen companies come up with the most intriguing and unusual ways of pivoting their business into some new pandemic-friendly business form. This is exactly what happened also to VR’s train restaurants (Finnish railway company). Some of the food was gifted to charity, but VR also came up with a quirky and fun business idea – what if VR started selling home delivered train restaurant food? The rest is history.

The online store for VR's home delivered food, VR’s meatball shop, was created in collaboration between Columbia Road and VR in a project where the implementation was done in 4 working days by only one person – me, UX & UI design consultant!

The implementation was done through Shopify, a fully managed ecommerce platform. To the average consumer the webshop seemed just as modern and technologically up-to-date as any other webshop, making it seem like there must’ve been a lot more work behind it than there actually was. But fully ready-made cloud solutions, such as Shopify have developed to the point where they’re ready to be utilised by larger organisations.

In this blog I’ll run you through the process of building a webshop in 4 days. If you’re curious to ask further questions, feel free to shoot me a message on LinkedIn!

First steps – What is this webshop about?

One Monday, I started working as I normally do, energised by a relaxing weekend and blissfully unaware of the project that I was about to get myself into. Elli, Columbia Road’s VR account representative, approached me and explained briefly that they had come up with an idea of selling home-delivered meals on a webshop, and asked whether it was possible to implement something like that in a very short time period.

After our proposal was sent, the contract was signed in 2 or 3 days, and already on Thursday morning, we had the project kick off meeting. I had 4 working days to get the webshop up and running so it was time to roll-up my sleeves and get to work!

On the first day of the project the first thing I needed to think about was simply – what things do we need to figure out to be able to successfully implement this? I didn’t have the time to do a nice trello board or neatly list necessary steps. I simply started jotting things down on a piece of paper, which ended up being basically the only project management tool that I used. I needed to start implementing things as quickly as possible.

I first approached this project by asking VR and myself

After an initial weighing of implementation options with some colleagues, we realised rather quickly, that Shopify was the easiest and fastest option. We knew we had to rely on some 3rd party plugins, but also needed to limit the amount of necessary integration work, trying to avoid complicating things. Personally, I had never worked with Shopify – I had no clue whether the things VR was looking for were even technically possible.

It’s somewhat rare to utilise fully managed platforms, such as Shopify, for larger organisations’ needs, as they often are too limited from software developers’ perspective. However, for truly fast experimentation, ready-made platforms are the superior solution, as this project also demonstrates. 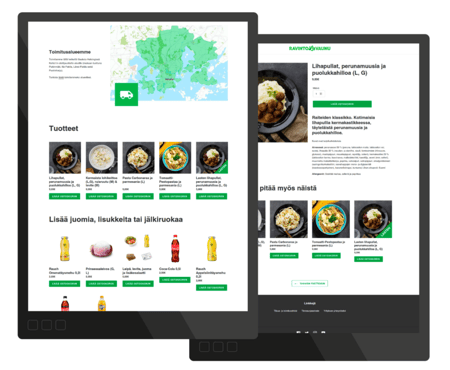 Another reason why ready-made solutions, such as Shopify, are the perfect pick for quick experiments, is the initial running costs. There will not even be a maintenance contract with Columbia Road after the initial building project – the store will stay up-to-date thanks to Shopify.

The broad application ecosystem that Shopify has, allows webshops to plug-in new features, such as additional payment methods, more delivery options and even new visual themes – all of which can effortlessly be integrated to the existing webshop. Modest running costs and an automatically evolving technical platform give you more time to experiment. In VR’s case, there is no need to sell thousands of meatballs a month to cover the cost of running a store.

Practical things to consider when putting up a new webshop

Photos and information on the products were basically the only things I had at the start of the project.

There was many practical things to consider:

We also had some very specific restrictions related to the products. The meals can only be sold in the Helsinki area within certain postcodes. Delivery happens only on Mondays, Wednesdays and Fridays, with two delivery window options: morning and afternoon. Orders must be made at the latest the day before by 4pm. Individual products are also combined into product packages.

As I had not used Shopify before, I had to first find out whether it was possible to customise the webshop according to these restrictions. Because I had already been working with VR for some time, I already knew which people to poke for what – who could help with the analytics, products, item names, photos, prices, payments, legal side etc.

As things progressed, I was happy to find out that even the more unusual modifications, such as the delivery window selection and family meal-packages could be implemented with the help of plugins on Shopify. 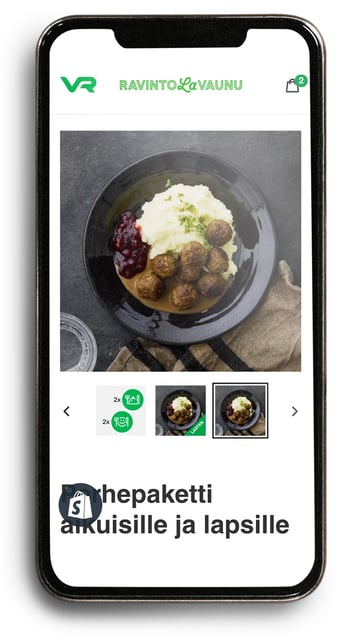 The only guideline I received was that the webshop should follow VR’s new brand style. Other than that, I simply started building.

I started off with a very rough wireframe for the frontpage and gradually refined, replaced and filled in details as soon as they were clarified.

The website was not the most polished website out there, but when you have 4 days time to implement everything, you have to prioritise making everything work.

Personal reflection – What did I learn?

I definitely learned a lot during this project. Throwing myself into this fast paced project was overall a really good learning experience and proves that quick projects like these can also be done in large organisations.

I originally was supposed to only do design and development, but I ended up doing quite a bit of project management as well. For every meeting, I was leading the conversation and asking for information from other people, or whether they had taken care of the tasks I had asked them to do. My role was central in terms of looking over the whole project, whereas usually I’ve been part of a bigger team where someone else is doing the project management.

And of course, I also learned quite a bit about Shopify because it was my first Shopify project.

The most rewarding part was seeing everything slowly (or not so slowly) come together – first starting with a very rough skeleton and then seeing how things build up.

Would I have done anything differently?

As COVID-19 precaution limitations have now been lifted in Finland to the extent where people are able to travel with trains, and VR’s train restaurant’s can serve their core purpose – serve train passengers – VR’s meatball shop has now been closed. Therefore, it’s a good time to reflect on the experiment!

Perhaps, it might have been possible to save some time acquiring information related to the project, but I did my best with the knowledge and tools I had. I do think we concentrated on the right things, given the timeframe.

If something, it would’ve been nice to do some more marketing for the project. With a bit more SEO and other marketing, I believe it would’ve been possible to reach even better sales results. Nevertheless, VR was very happy with the overall results, which of course is the main priority.

On the other hand, if sales would’ve taken off radically, it would’ve pushed VR to take the next step with this experiment – how to start scaling? The one learning all companies should take from this case project, is to have the courage to try something completely unexpected. Start off as quickly and with as small investment as possible – later on, when the idea has been validated, it’s time to start worrying about how to scale the experiment, and move on to more comprehensive tools and platforms.

We're always looking for more developers, designers and marketing technology consultants – maybe you'll be one of our future highlights? ;)

The future of design systems