An afternoon with Sean Ellis – the godfather of growth hacking 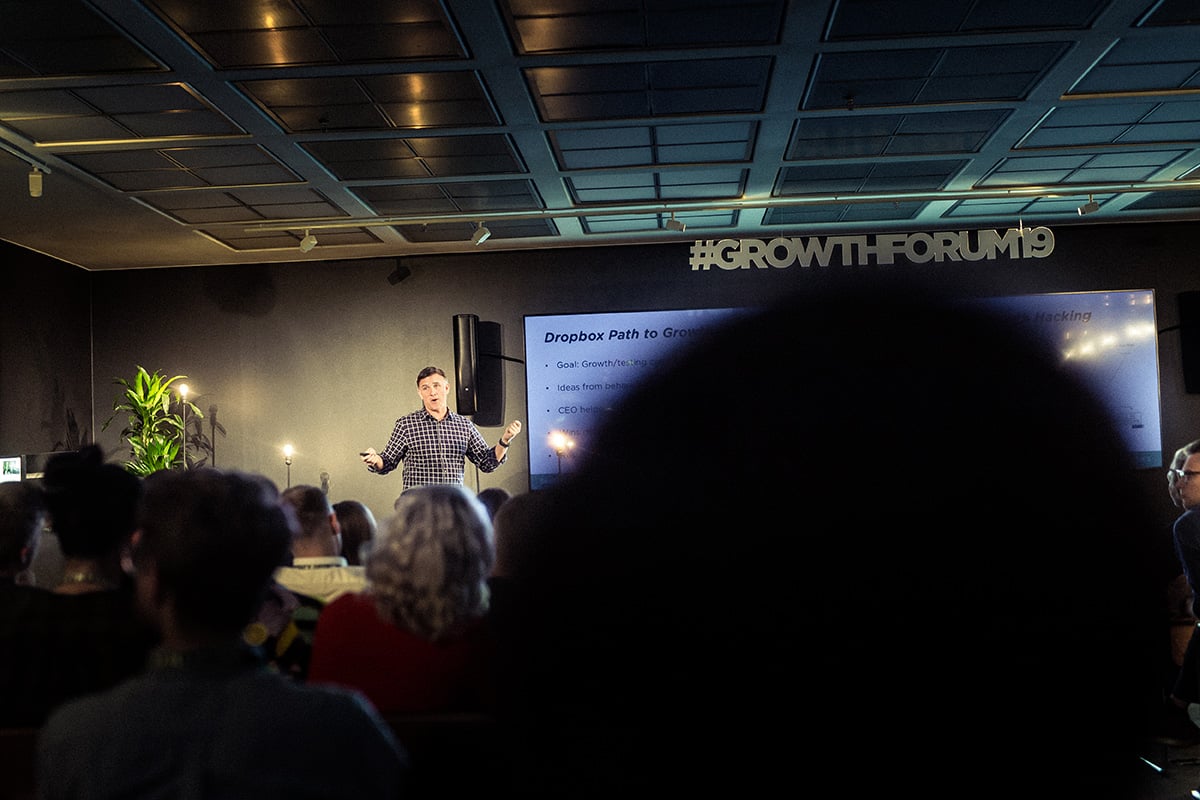 On his first visit to Finland on May 17th, Sean Ellis delivered the keynote address of our inaugural Growth Forum event to a sellout audience of over 250 industry experts and professionals. Last on the bill, following a case study from Marimekko and an insightful panel discussion, he came on stage to pitch growth hacking as a game-changing force, something with the power to turn established industries upside down.

He talked about the likes of Airbnb in the hotel industry and Netflix in the entertainment industry, as well as Walmart and retail. The message was clear from the start –

growth hacking is here to stay, and if you want your company to succeed then you need to be among the disruptors, not the disrupted.

Indeed, as he pointed out, it was not so long ago that Walmart was the biggest retailer in the world, head and shoulders above everyone else. Yet by the end of 2018, a mere 20 years since its IPO, Amazon has grown to the point where it was worth 2.5 times Walmart’s market value.

The secret to Amazon’s astronomical rise? Growth hacking of course!

Having set the scene Sean moved on to more practical, hands-on advice, and shared learnings from his own experience and illustrious career.

As a process, growth hacking is simple enough. It’s like any other scientific process, except that in this case the process involves running experiments across your entire customer journey (with a focus on accelerating value delivery for the customer as much as possible).

And as with any scientific process, a hypothesis is needed before you can test. In other words you have an assumption about what you think will happen in your test. If the test proves you right, you validated your hypothesis. And if not, then you learned something new. But without a hypothesis it’s really hard to see what exactly you’re trying to achieve so it’s hard to get any meaningful analysis from your results. From here the formula is simple.

Indeed one of the key takeaways for the afternoon was for all audience members to count the number of tests they are currently doing at their company, and then double it. Or better still, triple it. Just to set a target and start testing, to maximise learnings, and thus provide value to customers faster.

No tests = no learnings

Take Twitter as an example. After several years of exponential growth the company flatlined at 50 million users in 2010 and stopped growing. Their VP of Product, keen to get the company back on track, looked a little deeper into the numbers and saw that despite their large user base the company was only running two tests a month!

The conclusion was simple – to increase the number of tests from two a month to 10 a week (Sean came to the same conclusion during his time at Dropbox, where he came up with 10 ways to improve the early data he analysed – “not all of them worked, which is why I did 10 and not one”). 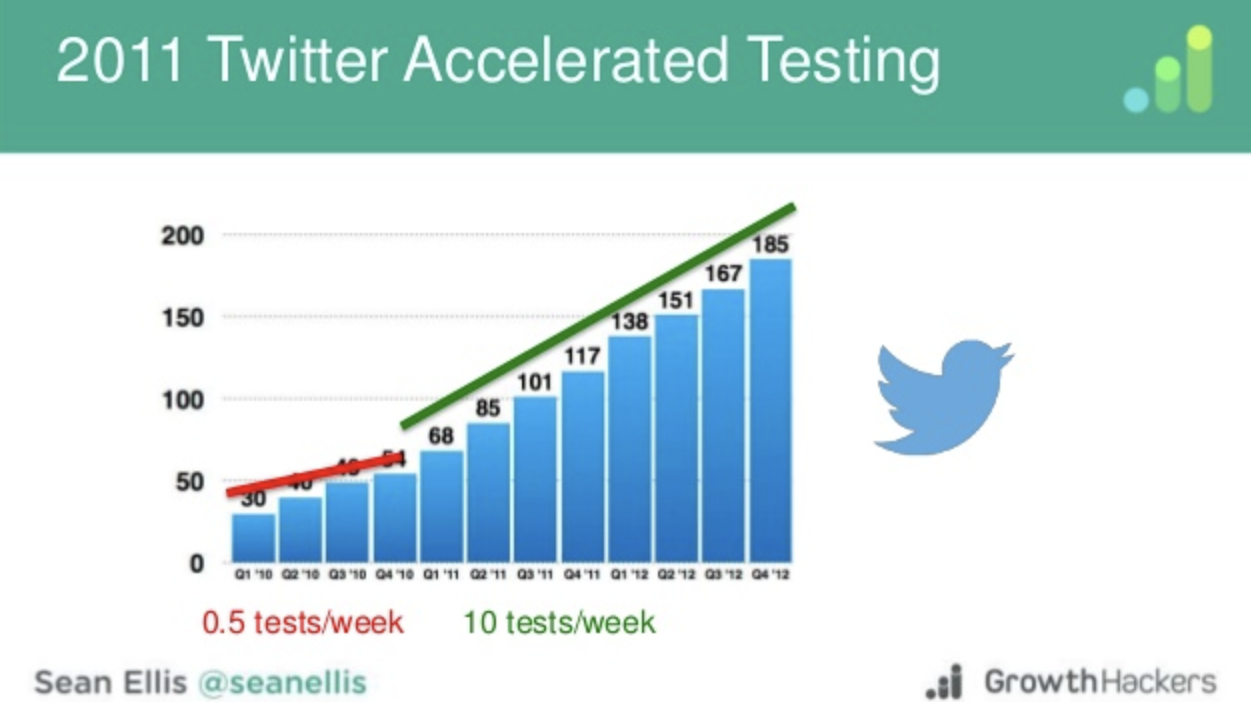 Number of experiments run at Twitter compared to number of users. Source: GrowthHackers, via Slideshare

Of course, 10 experiments a week is a lot! Especially for highly regulated industries (or if you lack 50 million users). But the main point here was about experimentation, and about staying ahead of the competition. In other words if you only manage five tests a year, but the competition does none, you’re still getting five times the learnings they are on how to deliver value! How to do growth hacking in bigger companies

Growth hacking is a mindset, and that to do it well requires everyone in a company to be onboard. Most of the successful companies implementing growth hacking do it as early stage B2C companies - the likes of Dropbox, Facebook, Slack, Amplitude and co.

This works because there is no culture to battle, no ingrained habits and no entrenched silos - all things that larger corporations do have. To work around this challenge requires a three-step process.

Step #1 – Define your North Star metric. This breaks down barriers within a company and drives alignment of a shared goal (team alignment on value delivery is crucial for successful growth hacking). Your “NSM” should in some way be related to customer value though, not revenue, because revenue without value makes for an unsustainable business model.

Take Facebook as an example. If their NSM were revenue they would show you as many ads as possible when you sign up. This would provide them short term financial gain but users would ultimately leave the platform as they tired of constant ads. Instead, by focusing on a NSM that drives user engagement, they are able to constantly grow their number of active users and thus exponentially grow advertising revenues in the long term.

Step #2 – Hit the ground running. Start running experiments that allow you to gain results quickly. With some tangible results in hand, use your wins to get permission to go more broadly within your organisation (across teams and departments). The key is speed, so start small with a view to expanding later on, and remember that every winning experiment you do should in some way improve your NSM.

Step #3 – Maintain momentum and testing velocity. As the size and scope of your experiments grow, remember to keep the pace. Don’t let things get so big that they take forever to execute or to get results. You’re still racing the clock here, both with internal stakeholders and your competition.

Keen on learning more on growth hacking? Get your own copy of our popular Growth Hacker's Handbook below!

This blog was written by our guest blogger John Hills, who is a Growth Agent and a freelance writer for Business Insider Nordic. Get in touch with him.