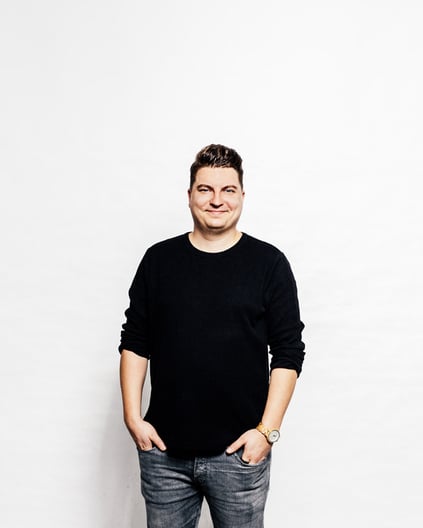 Hi Roope, How did you get good at what you do?

I have been interested in computers and especially websites since I was in high school. Back then I made my first blog, although I never actually wrote any blog posts, as I was more interested in the technology behind it all. I didn’t enjoy using the existing content management systems so I wrote one for myself. I also took some university courses already in high school, which made me interested in the field of computer science. Nowadays I’m very excited about the JavaScript ecosystem and especially React.

Where have you earned your spurs?

In 2013 I did a freelance project for Bond Creative Agency, through which we won a Silver Prize in Vuoden Huiput in the Young Creatives category, and received an Honorable mention in Grand One competition. Less than a year after, I joined Bond as a full time developer. We had quite a small team, which meant a lot of responsibilities and a very high learning curve, as we had to figure everything out by ourselves. In my four years at Bond I have participated in dozens of WordPress projects, as well as React based web applications.

Last spring I had the pleasure to meet Matti Parviainen, a UX designer from Columbia Road, and after a couple of beers in Populus, followed by a couple of interviews, I’m here now!

Joking aside, after four years at Bond I felt that I was in need of some personal growth, and when I heard about Columbia Road the opportunity sounded really interesting. I was keen on learning new skills and ways of working from more senior colleagues and an even wider variety of talented people.

Lauri, what will make our clients love Roope?

"Roope is a solution-oriented professional who concentrates on the important points while keeping the needs of the client in mind. UI/UX problems are his expertise, but working for four years in a designer led agency has also taught him to look at things from a design perspective. He is an easily approachable people person, and understands what benefits the client, thus keeping the tech jargon to a minimum,” says Lauri Eloranta, Managing Partner at Columbia Road.

What makes your heart beat a little faster?

"I enjoy reading, although recently I've taken less time to read than I'd like, but I'm trying to improve with it. My spouse and I have this more or less regular habit of going to new parts and suburbs of Helsinki for walks. We find it to be a fun way to get to know new places.

In the past year I have found self-care measuring more and more interesting. Which is why I got really excited about the Oura ring, and was thrilled to later work on the site. I see this as a continuation to my obsession of putting things into spreadsheets.

I also joined a running course a couple of months ago with the goal of running a half marathon next spring or summer. My goal is to beat my previous time from five years ago," says Roope.