Three tools that bridge the gap between designers and developers

This blog post was written together with my fantastic colleague, Rory How!

Digital designers go through a creative process of crafting beautiful, sometimes pixel-perfect designs. They have a vision of how the website should look like. Developers then have the hard task of implementing this vision. Sometimes, there can be a disconnect between how the designer had envisioned the website to look, and how the developers have interpreted it.

It is important to bring designers and developers as close as possible together so that they can find solutions when they bump into problems. In this context, a design system can help ease the communication and the process, especially when both entities are not seated in the same room. In this article, we are going to go through some tools that aim to bridge the gap between designers and developers.

While there are many tools available, we decided to focus only on three tools for this post: React Sketch App, Supernova Studio and Storybook. We chose these tools because they all aimed at bridging the gap between developers and designers in some way, some of them from the designers’ and some of them from the developers’ perspective. They all aim at solving different problems, and we were able pull different takeaways. The same structure will be used for all tools: idea, how we tested it, benefits, drawbacks and lessons learned.

Developed by Airbnb, it is an open-source library linking React components to Sketch. Based on the code, it renders the design in a Sketch file.

→ We cloned the react-sketchapp repository (git clone), which provides some examples.

→ From there we were able to navigate to any one of the examples (we decided to use the ‘styleguide’ example, but there are many more) and install it’s dependencies using npm install.

→ We then ran npm run render with an empty sketch file open and our code was imported into sketch.

→ From here we can see our React code being rendered directly into a sketch file. We are able to make changes to our code (changing styles, adding new components etc.) And these changes would be hot-reloaded into our sketch file.

React Sketch App is a tool to help model designs in code. The code is not something that will be final. You will need to refactor everything as you cannot implement the code as it is. However, it is a facilitator. It is especially useful for developers who would like to learn Sketch and who want to figure their way around Sketch. Or for designers who would like to work from React code to improve the design system style guide.

Indeed, if all designers in a project also know how to code, they can use React Sketch App to manage the style guide by passing on the file. When there is a version that satisfies everyone, then someone would take the code and transform it in proper React HTML. So in a way, it does not really bridge the gap here since you need the designer to be a developer in order to create the code, and you need to adapt the code generated to use it in production. It seems double work for developers. If a designer would create the assets from scratch in Sketch, and then export it in Zeplin, it would create a skeleton for the developers to work from. This code would have a higher level of consistency. Developers can then use GitHub to see the differents and pass it on from one to another.

It’s promise is to convert designs into a native mobile app. So based on a Sketch file, it generates code and creates a real native app. 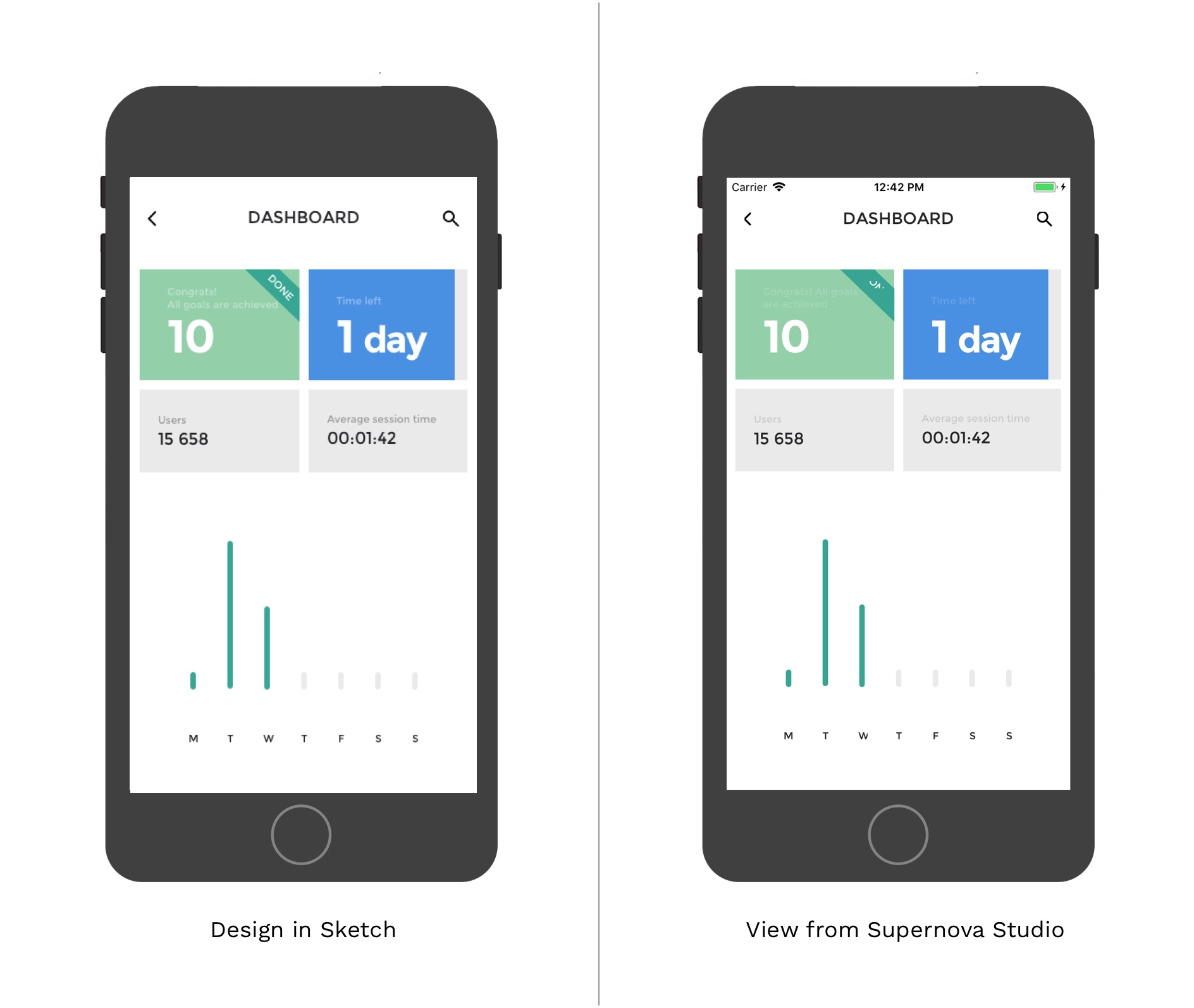 Differences between original design in Sketch vs. view in Supernova Studio

→ We installed the Supernova Studio application (available from here). A Sketch file was imported into Supernova, from Supernova.

→ We noticed some differences between the Sketch designs and how they looked on Supernova, as shown in the picture above, so we edited the original Sketch file and selected the artboards to import.

→ All the layers from the artboard automatically became native components in Supernova Studio. We did not transform some of the components into more advanced components.

→ We were able to export to a basic React-Native application, which runs with the help of expo, for rapid code deployment.

Though Supernova Studio has been developed since three years, it is still a new product, thus it does not function perfectly. It requires some time to understand the logic and how to use it with all its power. However, this tool has a lot of potential. Supernova Studio wants to help automatising the transition between the designer to the developer by letting the developer or designer specify the functionality of the components. The developer or designer need to tweak the components (e.g. buttons) so that the functionality can be executed correctly in the code. The developer can then focus more on the logic and on the backend code than on the frontend.

→ We took an existing codebase (a “Tech Corner” that we use when teaching students how to code using React) and decided to add the components in the project to a Storybook.

→ We installed Storybook globally using npm install -g @storybook/cli (a CLI tool for Storybook) and then ran getstorybook in our project.

→ As we were using a React project based on create-react-app, the CLI tool was able to pick up on this and installed the relevant dependencies, create a couple config files, and a src/stories directory with an index.js with a couple sample components.

→ From there, we were able to import our components and their corresponding CSS — and it was complete!

Though it is a handy tool, Storybook will not solve the process issues. Designers and developers still need to sit and work next to each other. This is a documentation tool that should be used when the designs are ready. It is a clear and easy tool for developers that should be embraced by designers.

It is a sterile environment where both designers and developers can make components pixel-perfect as there is no external “noise” (i.e. other components, backgrounds etc). However, it adds an intermediary step that requires maintenance. If the design needs an update, the development team needs to update first Storybook. In a way, it can slow down the process, but at the same time it makes it process-friendly.

Having designers and developers physically in the same room and working together is the most efficient way to ensure that the vision is commonly shared. However, it is not always possible. In such cases, perhaps some of the tools above can help ease the communication.

Out of the three tools, Storybook is the most simple. It covers only a small area of a design system (the component library) but it does this very efficiently and is simple to use. The two other tools cover a broader area, so there is a lot of room for improvement.

As mentioned in the previous articles, design system as a whole is a step towards formalising communication/workflow. It is a tool in itself. React Sketch App, Supernova Studio and Storybook can be used to facilitate the creation of the design system. For example, if a designer uses React Sketch App to formalise the code, the handover to the developers is easier since there is an example of how the code should look like.

Another factor that would help ease bridge the gap is for the designers to know some code. Not only it opens a lot of doors for them, it also helps bring the designs to the next level (for example with React Sketch App or Framer). If a developer understands the designs, it facilitates daily work and makes the development work easier. Also, it enables the developer to be more active in the other phases and not just implement design.

Subscribe to our newsletter below to get notified when the last post of the Design Systems series is out. If you have missed a post, check out the previous posts in the series:

Recruiter’s letter: 10 stumbling blocks to avoid in your technical interview